The NYT is quickly becoming a better source for medical information than JAMA and The New England Journal of Medicine. Last week, they exposed the cholesterol-pills-for kids fallacy, and this week its bone density pills.

I posted about the harms of drugs like Fosamax, Actonel, and Boniva last month, here, after reading an article in an obscure journal that timidly suggested they might be overused. The NYT is sounding a bold alarm. Here’s their article:

Questions About Long-Term Use of Bone Drugs 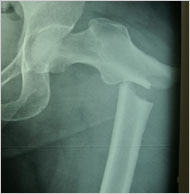 This ugly image is a transverse fracture of the femur — you can see how the bone broke straight across. It’s a rare type of fracture — accounting for only about 5 percent of all fractures to the hip area, and it often happens as a result of severe trauma.

But a handful of case reports of low-trauma fractures have detected the odd pattern in long-term users of bone drugs called bisphosphonates. It’s a rare side effect, but notable given that bone drugs are supposed to strengthen bones, not weaken them.

The cases of bone drug users with these unusual fractures are the topic of my Well column in this week’s Science Times. One of the case studies involves a Tucson physician, Dr. Jennifer Schneider, who was traveling in New York when her subway car lurched. The jolt caused Dr. Schneider to shift her weight, and her thigh bone, which had been aching for weeks, suddenly snapped. After two surgeries and a lengthy recovery, Dr. Schneider began researching the issue and learned of the association between the unusual break and long-term use of bone-building drugs caused bisphosphonates, which are used to treat patients with osteoporosis. She wrote up her own story in the medical journal Geriatrics and has given talks on her experience.

“What I want is research to find out who are the people at risk,’’ Dr. Schneider said. “If we can find it out before they have a fracture, maybe we can prevent it.’’

Early data are mixed. The Journal of Orthopedic Trauma recently reported on a study from researchers at New York-Presbyterian Hospital/Weill Cornell Medical Center. Among 20 cases of the unusual fracture, 19 were on the bone drug Fosamax. However, Mayo Clinic researchers in Rochester have studied about 1,700 fracture cases, and preliminary findings have not turned up any increase in the unusual fracture. And the researchers who have identified the trend all emphasize that for people at high risk of osteoporotic fractures, the benefits of bone drugs clearly outweigh the risks.

To read more about the issue, read my full Well column here.

And to find out your risk for bone fracture, check out this calculator created by the World Health Organization. There are four different tools for the United States, including one each for Caucasians, Blacks, Hispanics and Asians.